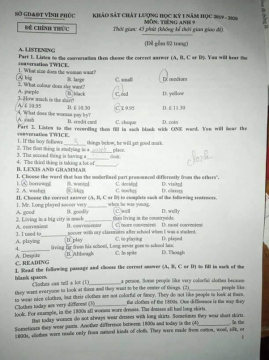 2, Choose the word that has the underlined part pronounced differently from the others?

3. I used to ____ soccer with my classmates after school when I was a student

I, Read the following passage and choose the correct answer (A, B, C, D) to fill in each of the blank spaces

Clothes can tell a lot (1) ____ a person. Some people like very colorful clothes because they want everyone to look at them and they want to be the center of things. (2) _____ people like to wear nice clothes, but their clothes are not colorful or fancy. They do not like people to look at them. Clothes today are very different (3) _____ the clothes of the 1800s. One difference is the way they look. For examples, in the 1800s all women wore dresses. The dresses all had long skirts

But today women do not always wear dresses with long skirts. Sometimes they wear short skirts. Sometimes they wear pants.Another difference between 1800s and today is the (4) ____ In the 1800s, clothes were made only from natural kinds of cloth. They were made from cotton, wool, silk, or linen. But today, there are (5) _____ kinds of man – made cloth. A lot of clothes are now made from nylon, rayon, or poly este

My village was never a big village, not was it particurlaly successful or well – known. It was a place were simple people worked on their land, tending citrus groves and running poultry farms. The most exotic plantation grew avocado, and a palm tree nursery was something of an attraction

The village was established by a group of Greek immigrants in 1937 in what was then known as British – controlled Palestine. When we first moved here, one could still here some Greek in the street, the local store sold original Greek delicacies and from time to time we were invited to sit on a neighbor’s porch and share some onxo at the end of a working day

In the last few years, my village has changed dramatically. Very few people work in in agriculture now; they can no longer support their families growing oranges and chickens. As a result, they must find their income outside the village and rent out their land or sell their little family farms altogether. Some of the land is still used for agriculture, but no longer for the family farms. Now it is the agriculture of luxuries

1. What was TRUE about the village?

A. It was a big village

B. It was successful

C. It was famous

D. It was established by the Greek

2. According to the passage, what did the people in the village NOT do?

A. Worked on their land

C. Raised cattle on the farms

3. The founders of the village were immigrants from

4. What can best describe the change of the village recently?

A. The change is very fast

B. The change is very slow

C. The change is normal

D. There is not much change

5. How do the villagers earn their living now?

A. They grow oranges and chickens

B. They run family farms

C. They work in the inside villages

D. They hire out their land or sell their farms

1 – D. It was established by the Greek

5 – D. They hire out their land or sell their farms

I, Finish the second sentences so that it means the same as the first

1, It’s two years since we last spoke to Mrs. Mai

We haven’t spoken to Mrs. Mai for two years ago

2, I don’t have enough time to finish this work

I wish I had enough time to finish this work

Tea can’t be made with cold water

4, “What is your favourite subject?” the teacher said to Nam

The teacher asked Nam what his favourite subject is

1. Phonetics and use of English

I, Choose the word A, B, C, D whose stress pattern is different from the others

1, The boy ran away after he (break) our window -> had broken

3, She said she (visit) Hue the following Sunday -> would visit

III, Choose the best answer among A, B, C, or D to complete the sentences

B. Twice as much as

D. Twice as many

5. In Viet Nam, ___ often refers to age and social position, not to wealth

I, Read the passage and choose the most suitable word to fill each blank. There are TWO words you will not need

I’ve been working with teenagers for five years. I’ve spent time talking to them besides teaching them English. I remember once I asked them (1) _____ their parents or classmates had more influence on their success at school. Some said their parents had (2) _____ influence on their achievement. The (3) _____ given was that parents usually loved their (4) _____ unconditionally, and they definitely would do their best to help and support their children. For (5) _____ parent could do all the housework so that their children could have time for studying

1. Read the passage and answer the question below

Bill Gates is the co-founder of Microsoft, the world’s largest PC software company. He is among the richest people in the world. Bill Gates’ interest in computers started when he was a teenager/ After high school, he was accept to several top colleges in the USA: Harvard, Yale, and Princeton. He chose to go to Harvard to study law. At Harvard. He focused more on his interest in computer than on coursework. He often relaxed by playing video games in Harvard’s computer lab. He left Harvard before graduating because he wanted to open a software company with his friend Paul Allen. However, he later said: “I don’t think dropping out is a good idea”. In 20067, he received an honorary degree from harvard. He began his speech by saying this to his father in the audience. “I’ve been waiting more than 30 years to say this: Dad, I always told you I’d come back and get my degree.” Bill Gates is no longer working full time dor Microsoft. He is now, with his wife, running the Bill & Melinda Gates Foundation which aims to improve healthcare, reduce poverty, and promote education around the world.

1, When did Bill Gates first develop his interest in computers?

2, What did he study at Harvard university?

3, What did he often do to relax while at Harvard?

4, Why did he drop out of Harvard?

2 – He studied law at Harvard university

5 – He received an honorary degree from Harvard in 2007

I, Complete each of the following sentences using the cues given. You can use other words in addition to the cues to complete the sentences

Đáp án: Though the weather was bad, Long helped his parents (to) plant (the) vegetables

Đáp án: Hung wishes he had a mobile phone to learn English

Đáp án: Mr. Pike is/ was not sure where to go on his holiday

Đáp án: China is by far the most populous country in the world

Phần Writing II đề thi học kì 1 môn tiếng anh lớp 9 tỉnh Bắc Ninh: Complete the second sentence ao that it means the same as the first. Use the word in brackets. DO NOT change the word

1, Don’t leave the lights on when you leave the classroom

Đáp án: Turn off the lights when you leave the classroom

2, “What should we do to make Linh feel happier?” They wondered (to)

Đáp án: They wondered what to do to make Linh happier

3, People have reported that Thien Duong is the longest cave in Viet Nam (be)

Đáp án: Thien Duong has been reported to be the longest cave in Viet Nam

4, The mother was happy when she learned that her daughter had enjoyed herself at the party (to)

Đáp án: The mother was happy to learn that her daughter had enjoyed herself at the party

5, He said to her, “My friends will come here tomorrow” (his)

Đáp án: He told her his friends would come there the following day